Make my joy complete by being of a single mind, one in love, one in heart, and one in mind. Nothing is to be done out of jealousy or vanity; instead, out of humility of mind everyone should give preference to others, everyone pursuing not selfish interests but those of others. P

I have a son who lives in the Snowmass, Colorado area and we “run away” from the heat every summer to visit he and his family. This picture is of the St. Benedictine’s Monastery in Snowmass. It is the home of one of the most famous contemplative writers of our time, Fr. Thomas Keating. I was fortunate enough to attend a contemplative mass in this idyllic setting last Sunday.

The homily was on humility. This theme has reoccurred in my reading and hearing several times these past months. I am pondering what God wants me to hear. Humility is not stepping aside and allowing situations and people to just wash over me. Rather, I bel
ieve, it is being aware when the ME thinking gets in the way of me being the best person God wants me to be. Allowing myself to empty all the things that stand in my way.Contemplative prayer is the best way I have found to do this. Fr. Richard Rohr says it best:

“Contemplation teaches us to live in an undefended way. Little by little we can let go of the need to prove ourselves right or superior. Contemplation retrains our bra
ins to understand the bias from the bottom, to know with true humility and love.”

If you do not have a regular time of contemplation, or just sitting with God, I would invite you to try. Start with just a few minutes. Clear your mind; focus on your slow and steady breathing. Sometimes I sit with a few words “God fill me with your love” or “Bless me God, help me to bless others” As you become more comfortable with this you might want to increase your time. There is no perfect amount of time, just feel God sitting with you and be open for what he might be saying to you. You might be amazed at what you hear!

I was part of a conversation recently about God’s miracles and if they still happen today. The consensus was, yes but maybe not as often. I am not sure I agree.

The picture here is of a dog my son photographed in Greece. Every evening this beautiful dog runs down to the sea to watch the sun disappear behind the horizon. He has a ritual of watching the ordinary and being filled with it’s wonder. To me, it is a miracle of awareness of God’s creation.

I can become immune to the every day. We forget to watch for the miracles all around us in the world of nature. It is a miracle that seeds planted in the fall become the spectacular wildflowers of the spring, that the birds begin their chorus of song every morning as the sun comes up, and seeds of the dying of the sunflower bloom become food for many.

Mary Oliver is one of my favorite poets. In her book New and Selected Poems, Volume One, she has a beautiful poem on this idea. Take a few minutes tonight and watch miracle of the sun dropping from site. As you do, read this excerpt from Ms. Oliver’s poem “The Sun”.

Have you ever seen
anything
in your life
more wonderful

than the way the sun,
every evening,
relaxed and easy,
floats toward the horizon

and into the clouds or the hills,
or the rumpled sea,
and is gone —-
and how it slides again

out of the blackness,
every morning,
on the other side of the world,
like a red flower…..

Mandala translated means “circle.” It represents wholeness and can be seen as a model for the organizational structure of life itself — a cosmic diagram that reminds us of our relation to the infinite, the world that extends both beyond and within our bodies and minds.  The mandala is primarily used as a form of meditation and prayer to gain knowledge from within.

Listening prayer invites us to listen with our whole being.  Holy listening involves all our senses and calls us to be mindful and aware of God’s presence wherever we may be.

Lectio Divina, Sacred Reading, invites us to  read scripture in a slow and reflective manner.  As the passage is read, listen for a word or phrase that captures your attention.  You may read through the passage again, listening deeply.  What does that word or phrase evoke within you?  Ponder and ruminate on those words.  Respond within to those thoughts and stirrings.  Finally, what might be the invitation God is offering you?

You don’t have to be crafty to make these simple prayer beads! Maybe you have different ways of praying with prayers beads…we’d love to hear from you!  Post your images and thoughts!

week during the season of Lent, Reah Ministry will post a video inviting you to experience a different way of prayer.  The recordings were made in conjunction with Spring Creek United Methodist Church.  Each Sunday we will post a new video.  Enjoy this introduction by Rev. Becky Hamann. 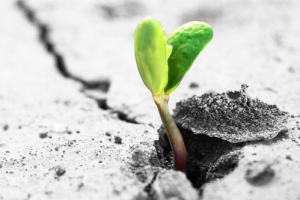 A few months ago I happened upon an article about a seed that had been dormant for around 2000 years, yet when nurtured and tended to, produced a tree.

That seed, the oldest ever known to produce a young tree, was found during an archaeological excavation at King Herod’s palace on Mount Masada, near the Dead Sea in the mid 1970’s. The seed was stored along with other finds from the dig.

Thirty years later, Dr. Sarah Sallon, a pediatrician and researcher, got word of the stored seeds. Interested in the medicinal uses of ancient plants, Sallon asked if she could have some seeds. She was given 3 seeds.

Dr. Sallon then took the three seeds to a botanist, Elaine Solowey, who specializes in tending rare or near-extinct plants back to life. When she received the seeds, she was less than optimistic about their future growth. The first thing Solowey did was to soak the seeds is warm water, and then added gibberellic acid, a potent growth hormone used to induce germination in reluctant seeds. She tended to them daily. Much to her surprise 5 weeks later one pale yellow-green sprout began to show through the soil. The second sprout soon appeared, it looked stronger than the first. Then a third sprout burst through, looking healthy.

I was struck by the first step the botanist took…she soaked them in warm water. Such a gentle step to begin restoration! She then nurtured them daily and patiently waited the outcome.

There are parts of our souls, our lives, relationships, and physical being that may be yearning to be revived. Maybe there is a hobby that has gone by the wayside, is it time to bring it back? Is there a relationship that might be rekindled? Maybe there is dream that was put aside, or a longing to reconnect with nature in some way.

Where is the yearning for restoration in your life? What is a gentle way to begin the process of revitalization?

Have you ever looked for your glasses while they were on your head? Or asked someone where your phone is while you were still holding it? We have too! And that is the reason for this blog. Well, not to find your glasses, but to realize that the search for Spirituality, the Sacred, is often like looking for the phone we are holding. We are searching everywhere but within…within our self, within our day, within our relationships, within our surroundings. The blogs that will be posted are the musings of people who seek to grow in union with God and all creation. Who seek to recognize the Sacred in the smallest of things, in the lost keys, in the funny moments, in the moments of suffering and so on.

We invite you to journey with us …..